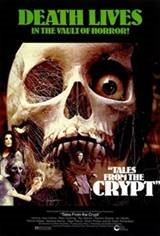 Tales From the Crypt

The phenomenon of Tales from the Crypt seems to have no endings, only changes. This successful pun-filled style of presenting ironic horror tales had its beginnings in William Gaine's E.C. comic series. At one time, outlandish E.C. Comics were at the heart of a national furor over the evils of comic books, which were thought to lead to moral degeneracy.

The big comic-book publishers were frightened into freezing E.C. out of their distribution network, which killed the business. This British movie was based on the Tales from the Crypt series, which spawned several subsequent movies (and many imitators), at least one television series, and a whole new wave of comic books.

Released in 1972, this movie has five episodes based on Gaines' stories, each introduced by Sir Ralph Richardson as the eerily cheery Crypt Keeper. His comedic approach to the role was misunderstood at the time, as reviewers expected a more solemn approach to horror. In All Through the House, Santa Claus is someone to avoid.

In Reflection of Death it takes some people a while to realize the truth about themselves. In Poetic Justice death cannot prevent one man's revenge. The episode Blind Alley demonstrates a new use for razor blades. Wish You Were Here cautions against taking native artifacts lightly (among other things).

Among the stars featured are Peter Cushing, Joan Collins and Patrick Magee.