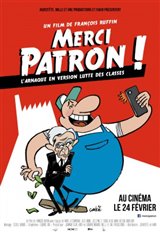 Founder and editor of the satirical quarterly Fakir, François Ruffin has a mission. He wants to restore dialogue between Bernard Arnault, chairman and CEO of the luxury goods conglomerate LVMH, and the workers he laid off over the years as jobs were outsourced to foreign labourers.

In northern France, Ruffin meets Serge and Jocelyne Klur, former employees of the Kenzo costume factory, which was relocated to Poland under Arnault’s orders. Finding out that the Klurs live in abject poverty and that their debts are accumulating, the reporter decides to have them tell their story at an LVMH general meeting. When they are expelled from the meeting, Ruffin and the Klurs don’t let themselves get discouraged, instead coming up with a plan worthy of a twisted Robin Hood.