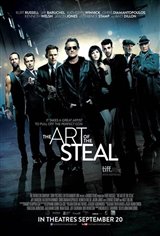 The Art of the Steal

Retired motorcycle daredevil/art thief Crunch Calhoun (Kurt Russell), more famous for his crash landings than his death-defying leaps, considers himself something of a master thief, but he winds up in prison when he's double-crossed by his brother and partner-in-crime Nicky (Matt Dillon).

After serving his sentence, Crunch is tempted to complete one last heist to make some money by stealing one of the most valuable books in the world. He reluctantly reunites with Nicky, and reassembles their old crew. With a painstaking plan in place, can the Calhoun brothers pull off the job and hold on to their tenuous truce?