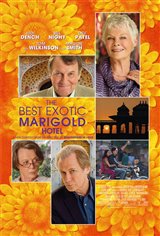 A group of British retirees are enticed by advertisements to travel to India to stay at the Marigold Hotel, which has been restored as a retirement home by a young Indian man (Dev Patel) with the best of intentions.

However, when they arrive, they find the living accommodations aren't quite as luxurious as portrayed in the brochure. Despite having to cope with broken furniture, phones that don't work and food they can't pronounce, they share a number of unconventional but hilarious experiences that bring them closer together.

Based on the novel "These Foolish Things" by Deborah Moggach.