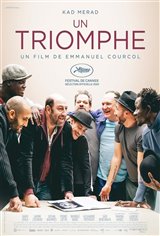 Étienne, an actor who has been unemployed for three years, obtains through a friend a job running a drama workshop in a prison in the Lyon suburbs. Under his direction, five nonchalant inmates meet to recite La Fontaine's fables. Witnessing the constant progress of his students in just two weeks of work, Étienne challenges them: to mount the play "Waiting for Godot" by Samuel Beckett in six months time at a theater in the city in front of a real, paying audience. Two months after the start of rehearsals, the fragile harmony of the group is shaken and the director of the prison struggles to obtain the necessary exit permits.