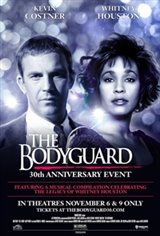 In celebration of 30 years of The Bodyguard, the timeless classicreturns tothe big screen for a special two-day fan event. In her spectacular film debut, Whitney Houston plays Rachel Marron, a music/movie superstar at her peak. Fans want to see her. Hear her. Touch her. But one wants to kill her - and that's where security expert Frank Farmer, played by Kevin Costner,comes in. Farmer is a professional who never lets his guard down. Rachel has always been in control of her glamorous life. Each expects to be in charge. What they don't expect is to fall in love.Written by Lawrence Kasdan and directed by Mick Jackson, The Bodyguardhas it all: Suspense. Thrills. Romance. Peril. Passion. And the shining brilliance of two great stars.Following the film, this special event will conclude witha musical compilation celebrating the legacy of Whitney Houston.