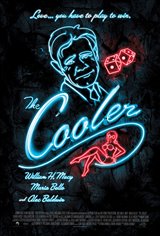 Bernie Loots (Macy) is a Cooler, a man whose luck is so bad, that it’s contagious. He’s employed by Las Vegas casino boss Shelly Kaplow (Baldwin) to spread his luck around, “cooling” winners just by his presence. Like an inmate serving time, Bernie’s been in Las Vegas for years, paying off a gambling debt he owes Shelly. But when Bernie falls in love with a cocktail waitress (Bello) with her own hidden agenda, his luck suddenly changes.

He’s in love and eager to leave Las Vegas behind and begin a new life. But Shelly -- his beloved casino in danger of being taken over by a pencil pusher (Livingston) eager to promote family-friendly gambling -- is not about to let his most valuable employee leave.