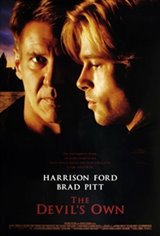 A policeman plays Good Samaritan to a visitor from Ireland, only to discover that he has a potentially deadly secret. Belfast-born Frankie McGuire (Brad Pitt) saw his father gunned down by enemy soldiers at the age of eight, and when he grew up he joined the Irish Republican Army, determined that one day his father's death would be avenged.

An especially ruthless volunteer, Frankie is responsible for the death of 13 British soldiers and 11 policemen.

After a particularly bloody battle, Frankie sails to the United States in a ragged tugboat he has restored; with a huge bundle of cash, Frankie intends to buy a stock of Stinger missiles from an underground arms dealer in America, Billy Burke (Treat Williams).

Upon arrival in New York, Frankie is met by a judge who is sympathetic to the IRA's cause and who arranges a place for him to stay. Using the name Rory Devaney, Frankie moves into the home of Tom O'Meara (Harrison Ford), a scrupulously honest cop.

Tom is already in the midst of a personal crisis; his friend and partner Edwin Diaz (Ruben Blades) recently shot a man that he knew was unarmed in the line of duty, and while Edwin wants Tom to help him cover up the matter, Tom's conscience will not allow it.

When Tom begins to realize that Rory is not simply a man running from the violence of his homeland, he's torn between his sympathy for Frankie's tragic childhood and his desire to see justice served and prevent needless death in Ireland.