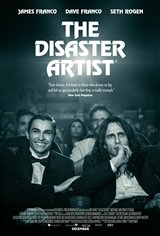 A behind-the-scenes look at the making of Tommy Wiseau's The Room (2003), starring Tommy (James Franco) and his best friend, actor Greg Sestero (Dave Franco). The two met during an acting workshop, when Greg was just an aspiring actor.

Tommy takes Greg under his wing, setting him up in Los Angeles in an apartment Tommy rarely uses. While Greg soon finds an agent (Sharon Stone) and a girlfriend (Alison Brie), Tommy isn't as lucky, so he decides to write, direct and star in his own movie, despite lacking talent in any of those areas.

The Room, made on a production budget of $6 million was notoriously awful. It opened in two Los Angeles theaters in June 2003 and grossed a pitiful $1,200, but in a twist of fate, went on to earn a cult following, earning the dubious honor of being dubbed "the Citizen Kane of bad movies."