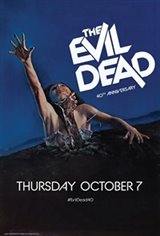 Ash (Campbell), his girlfriend Linda (Betsy Baker), his sister Cheryl (Ellen Sandweiss), and couple Scotty (Hal Delrich) and Shelly (Sarah York), drive to a remote cabin in the woods for a fun getaway. While there, they find the Necronomicon Ex-Mortis (aka "The Book of the Dead"), an ancient tome whose text reawakens the dead when read out loud.

After unintentionally releasing a flood of evil, the five friends must fight for their lives or become possessed.