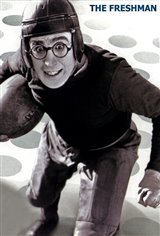 However, moments after he arrives in the city, he's robbed by Victor Ray (Bruno Kirby), leaving him no money for the $700 in books required by his instructor, Arthur Fleeber (Paul Benedict). A few days later, Clark runs into Victor and demands his money back, but Victor has already lost it (on a horse race in which he wasn't entirely sure the animal he bet on was a horse).

Instead, he offers to fix Clark up with a job with his boss, an importer and exporter named Carmone Sabatini (Marlon Brando), who bears a stunning resemblance to Don Corleone in The Godfather. Clark's adventures with Sabatini are just beginning when he's instructed to pick up a package from the airport.

Clark is expecting it to be contraband, and he's right, but not in the way he figured -- it turns out he's accepting delivery of a komodo dragon, which is to be served at a gourmet club specializing in dishes prepared from endangered species.

Marlon Brando's hilarious comic variation on one of his best-known roles is the highlight of this film, but Bruno Kirby and Paul Benedict also deliver fine comic turns, and Matthew Broderick copes nobly with his role as the film's lone normal person.