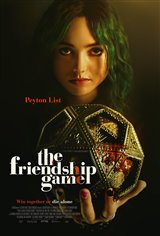 Two teens (Peyton List, Kaitlyn Santa Juana) buy a mysterious object that's a puzzle game to test friendships. If the friendships don't survive the game, then neither do the players. The two girls invite two other friends to play it with them one night.

They soon discover the object has cosmic powers and a baffling sort of consciousness. When one of the friends goes missing, they use the object to try to unravel the mystery about their missing friend.