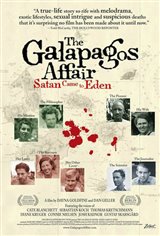 The uninhabited island of Floreana was once a secluded paradise in the midst of the Galápagos, until Berlin doctor Friedrich Ritter decided to renounce conventional society in 1929 and establish a new home on the undiscovered island with his lover Dore Strauch.

The couple believed they would lead a quiet, philosophical life, but they were very wrong – as soon as the international press became aware of their new living arrangement after letters they sent to Germany were leaked, they exploited their lives and sensationalized their exploits, naming them: “The Adam and Eve of Galapagos.”

The once secluded paradise was now the go-to destination for all sorts of people looking for fame and other personal ambitions, including a family hoping to live like the Swiss Family Robinson and a gun-toting Viennese Baroness and her horde of husbands. Soon enough, the inhabitants of Floreana realized that this paradise wasn't big enough for all of them, and it wasn’t long before they started dropping dead, one by one.