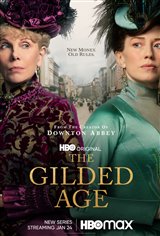 When the newly wealthy Russell family moves into a Manhattan neighborhood filled with residents from "old money," they're largely ignored, much to Mrs. Russell's (Carrie Coon) annoyance. She's determined to make her place in high society.

Across the street lives widowed Agnes Van Rhijn (Christine Baranski) and her spinster sister, Ada Brook (Cynthia Nixon). Agnes in particular wants nothing to do with the Russells and considers them garish. Their niece, Marian Brook (Louisa Jacobson), whose father just died, arrives in Manhattan to live with her aunts. However, she is courted by her generous lawyer Tom Raikes (Thomas Coquerel) from back home, which Agnes frowns upon, as he's not from old or new money.

On her journey from Pennsylvania to New York, Marian meets a young Black woman of her age named Peggy Scott (Denée Benton), who loans her money when Marian's purse is stolen. Agnes is taken with Peggy's intellect and hires her to be her secretary, although Peggy's mother, Dorothy Scott (Audra McDonald) doesn't approve of her living in a white neighborhood instead of Brooklyn, in their comfortable middle-class house.