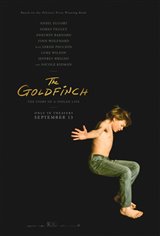 During a visit to the Metropolitan Museum of Art to see an exhibition of Dutch masterpieces, Theodore "Theo" Decker (Oakes Fegley), 13, loses his beloved mother when a terrorist bomb goes off. In the panic, the boy stuffs a small painting titled The Goldfinch, which is one of his mother's favorites, into his school bag in order to keep it safe.

He's taken in by a wealthy Upper East Side family, the Barbours (Nicole Kidman, Boyd Gaines), in New York City. However, when his deadbeat father, Larry (Luke Wilson), and his new girlfriend, Xandra (Sarah Paulson) show up, Theo is whisked away to Las Vegas. With little supervision, Theo starts drinking and taking drugs.

Years later, an adult Theo (Ansel Elgort), now back in New York, finds someone is threatening to ruin him if he doesn't hand over the painting, which he has hidden in a storage locker to keep it away from people who would take it for personal gain.

Based on the novel of the same name by American author Donna Tartt.