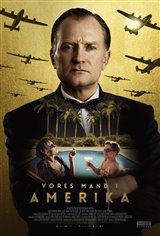 April 9, 1940: Nazi Germany has invaded Denmark with demands for immediate and unconditional surrender. Overwhelmed by the invasion, the King of Denmark, Christian X, surrenders his country to the Nazis. In the U.S., Denmark's ambassador, Henrik Kauffmann (Ulrich Thomsen), is relaxing with his family around the time of the invasion of his home country. When Kauffmann is informed of the Nazi invasion, he disagrees with his King's decision to surrender.

Willing to risk it all, he then decides to establish an independent embassy in America, in hopes of receiving support from the American government, to be recognized as Denmark's government. Now working independently of the Danish government, Kauffmann defies his King's wishes and betrays his country, as he begins to devise a plan that will ultimately mark the beginning of the end of Hitler's reign, and give the Danish people their freedom back.