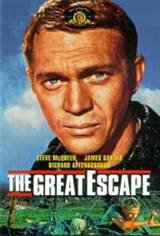 In WWII a group of allied American, British and Canadian soldiers, known for their uncanny abilities to escape any prison, are herded into a high security prison by the German Army. Lead by Captain Virgil Hilts (Steve McQueen) and under the direction of squadron leader Roger Bartlett (Richard Attenborough), these master escape artists will plan their greatest escape yet.