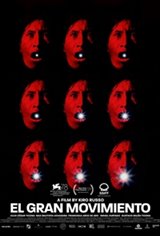 Expanding on the hybrid narrative of his remarkable 2016 film Dark Skull, Kiro Russo has mounted a monumental, gently mystical portrait of the contemporary central South American cityscape and those who work within its bowels and environs.

Set in the alternately harsh and beautiful terrain of La Paz, Bolivia, and its surrounding rural areas, El Gran Movimiento follows a young miner as he looks for work alongside his friends, even as he begins to descend into a mysterious sickness.

With its marvelous long-lens zoom work and increasingly dynamic, rhythmic editing, Russo's film is a hypnotic journey into a psychological space that touches upon the supernatural.