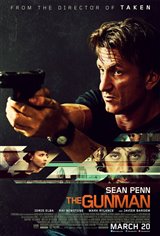 An ex-special forces government contractor named Jim Terrier (Sean Penn) has his past come back to haunt him when his former employer wants him killed.

From the jungles of Africa to the streets of London and the city of Barcelona, Terrier goes on the run on a mission to find the people who want him dead. To save his life, he has to bring down one of the world’s most powerful organizations and face a dangerous enemy from his past in a high-stakes showdown.