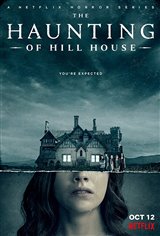 The Haunting of Hill House (Netflix)

The Haunting of Hill House, a Netflix original series, is a modern reimagining of Shirley Jackson’s legendary novel about five siblings who grew up in the most famous haunted house in America.

The series starts in the past in the early 1990s when the five Crain children — Steven (Paxton Singleton), Shirley (Lulu Wilson), Luke (Julian Hilliard), Theo (Mckenna Grace), and Nell (Violet McGraw) — move into the Hill House with their parents Hugh (Henry Thomas) and Olivia (Carla Gugino). Hugh and Olivia are trying to renovate the house so they can flip it for a profit and move into their dream home. Unfortuantely, the house has a dark history — it is haunted with ghosts that torment the family.

While in the present, the kids are all grown: Steven (Michiel Huisman) is a best-selling author, Shirley (Elizabeth Reaser) is a mortician, Theo (Kate Siegel) is a psychologist and Luke (Oliver Jackson-Cohen) is a drug addict. When Luke’s twin sister Nell (Victoria Pedretti) commits suicide, the four siblings and their father (now played by Timothy Hutton) have no choice but to revisit their past and confront the ghosts, some of which lurk in their minds, and some in that iconic terrifying house.