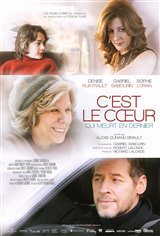 The Heart is What Dies Last

A novelist whose work is appreciated by critics and a small pool of readers, Julien nonetheless earns his living as a carpenter in a Montreal furniture factory. But his star is soon on the rise. He has just been nominated as a finalist at the Governor General's Awards on the basis of his new autobiographical novel, in which he recounts his tumultuous relationship with his mother. In the aftermath, a call from his sister convinces him to go and visit their mother at the retirement home.

Julien, who has not seen his mother for five years, finds a woman diminished by Alzheimer's disease, but still capable of harsh words. Over the course of his visits, Julien feels the bond that united him to this larger-than-life woman, who embellishes reality to the point of distorting it, for better and for worse. But the old lady didn’t ask to see him to beg forgiveness. She has a favor she wants of Julien.