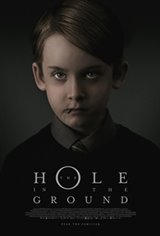 The Hole in the Ground

Sarah (Seána Kerslake) and her young son Chris (James Quinn Markey) move to a new home in the Irish countryside to get away from her abusive partner. However, the house is located next to a forest where an enormous sinkhole is hidden.

Chris initially worries whether he'll fit in at a new school and about whether he'll ever see his father again. However, after the boy vanishes one night, when he reappears, he seems different, although Sarah is relieved to see he hasn't been physically harmed. As his behavior grows increasingly disturbing, Sarah begins to fear that the boy who has returned may not be her son at all.