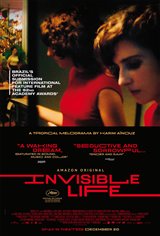 The Invisible Life of Eurídice Gusmão

Rio de Janeiro, 1951. Classical piano prodigy Eurídice Gusmão (Carol Duarte), 18, reluctantly helps her beloved sister Guida (Julia Stockler), 20, sneak out of the family home to join her secret lover, a Greek sailor named Yorgos (Nikolas Antunes). With happy dreams of a carefree life, Guida travels to Europe with him, leaving a letter for her parents to tell them she'll return after her wedding. However, Yorgos soon abandons her, leaving Guida alone and pregnant.

She returns to Brazil, where her father Manuel (Antonio Fonseca), a baker with conservative ideas, disowns her and tells her a lie in an effort to keep the sisters apart, by claiming Euridice is studying at a music conservatory in Vienna, pursuing her dream of becoming a concert pianist.

The truth is that Euridice never left Rio, having instead married a clumsy and charmless older man, Antenor (Gregorio Duvivier), whom she doesn't love. Meanwhile, Guida builds a new life for herself with her son in the slums of Brazil, where she is taken in by a former prostitute, while writing her sister letters, mistakenly believing her to be happy.