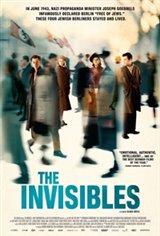 Although Joseph Goebbels declared Berlin to be free of Jews in 1943, there were 7,000 in hiding. Only 1,700 of those would survive to the end of the war.

What made these Jews invisible? In this movie, we take a look at four of them and how they stayed alive, using forged passports, dyed blond hair and faux identities. Ruth works as a servant in the home of a Nazi officer, Cioma is an art student who forges passports; Eugen joins the underground resistance; and Hanni dies her hair blonde to fit within the ideal image of the Aryan race.

Each lives with the courage to survive despite the ever present threat of being discovered and murdered.