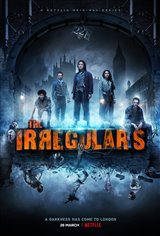 In Victorian London, Dr. John Watson (Royce Pierreson) approaches a gang of troubled street teens and ropes them into investigating a series of crimes that are both horrific and mysterious, for his business partner, the elusive Sherlock Holmes (Henry Lloyd-Hughes).

As the crimes take on a horrifying supernatural edge and a dark power emerges, it'll be up to the Irregulars, led by 17-year-old Bea (Thaddea Graham) and her younger sister Jessie (Darci Shaw) to come together to save not only London but the entire world.