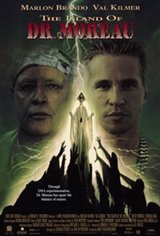 The Island of Dr. Moreau

On a remote tropical island, Dr. Moreau has appointed himself ruler over a menagerie of genetic mutants fashioned in his gene-splicing chamber of horrors.

The products of his misguided attempt to create a more pure human species, the man-beasts worship Moreau as their god and father and live by his code of law -- a code rigidly enforced by radio-operated implants in their bodies capable of inflicting pain and death.

Into this surreal nightmare arrives UN negotiator Edward Douglas (David Thewlis), the sole survivor of an airplane crash. Douglas is brought ashore on Moreau's island -- against his better judgment -- by the doctor's insane, drug-addled assistant, Montgomery (Val Kilmer), and eventually becomes a prisoner.

Horrified by the doctor's monstrous experiments and afraid for his own life, Douglas seeks the aid of Moreau's lovely daughter, Aissa (Fairuza Balk), in escaping the island, but is foiled at every turn by Montgomery and his armed man-beast lackeys.

Eventually, the creatures discover the existence of their electronic implants and remove them, providing the opportunity for an armed rebellion -- but eventual regression into their original animal state causes their revolt to collapse into anarchy.