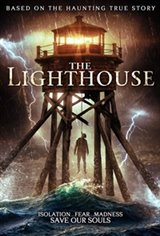 The two men eventually found their minds ultimately pushed to the limits as they descended into madness.

Based on the true story known as the Smalls Island Incident of 1801.