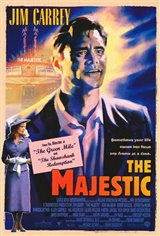 Hollywood screenwriter Peter Appleton (Carrey), a staff writer at HHS Studios in 1951, is an ambitious up-and-comer. His first produced screenplay, a 'B' movie swashbuckler entitled "Sand Pirates of the Sahara," has just opened on a double bill with John Huston's adventure, "The African Queen," at Grauman’s Chinese Theater on Hollywood Boulevard.

Not only is Appleton enjoying professional success, he has a hot starlet girlfriend, Sandra Sinclair (Detmer), the female lead in his big screen debut.

What if Appleton were suddenly targeted by the House Un-American Activities Committee for suspected Communist leanings uncovered during his college years?

What if Appleton lost not only his job and his girl, but his identity as well in a serious car crash in which the young writer developed amnesia?

What if Appleton, unsure as to who he really is, stumbles into a charming little town on Northern California's coast and is mistaken for one of the town's long lost World War II heroes?