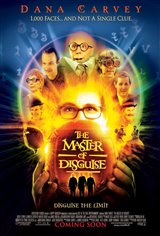 The Master of Disguise

Pistachio Disguisey (Carvey), a sweet-natured Italian waiter at his father Fabbrizio's (Brolin) restaurant, can't figure out why he compulsively mimics his customers and desires to change his appearance. What he doesn't know is that these traits are part of the Disguisey family secret legacy.

Fabbrizio has never told his son that he comes from a long line of masters of disguise able to mask themselves as almost anyone or anything by harnessing the great power of "Energico". Such a talent makes Fabbrizio the kidnapping target of his former arch-enemy Devlin Bowman (Spiner), a criminal mastermind with a plot to steal the world's most precious treasures.

At first Pistachio is not very effective as he attempts to control his inherited power, but soon, with the help of beautiful assistant Jennifer (Esposito), he's spinning through a manic blur of eccentric characterizations in an attempt to track down Devlin and save his parents.