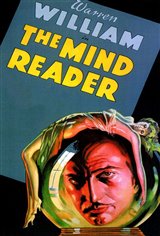 Following carnivals and performing small cons with his pals Frank (Allen Jenkins) and Sam (Clarence Muse), Chandra (Warren William) decides to have a go at a fake psychic scam, posing as a clairvoyant who can read minds and find lost items.

Life becomes complicated when he falls in love with Sylvia (Constance Cummings), the niece of one of his marks, who believes his power to be real. The two marry, and Chandra tries to keep the truth from his bride, but a tragedy reveals his dishonesty.