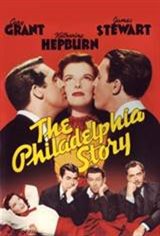 We open on Philadelphia socialite C.K. Dexter Haven (Cary Grant) as he's being tossed out of his palatial home by his wife, Tracy Lord (Katharine Hepburn). Adding insult to injury, Tracy breaks one of C.K.'s precious golf clubs.

He gallantly responds by knocking her down on her million-dollar keester. A couple of years after the breakup, Tracy is about to marry George Kittridge (John Howard), a wealthy stuffed shirt whose principal recommendation is that he's not a Philadelphia mainliner, as C.K. was.

Still holding a torch for Tracy, C.K. is galvanized into action when he learns that Sidney Kidd (Henry Daniell), the publisher of Spy Magazine, plans to publish an exposé concerning Tracy's philandering father (John Halliday).

To keep Kidd from spilling the beans, C.K. agrees to smuggle Spy reporter Macauley Connor (James Stewart) and photographer Elizabeth Imbrie (Ruth Hussey) into the exclusive Lord-Kittridge wedding ceremony. How could C.K. have foreseen that Connor would fall in love with Tracy, thereby nearly lousing up the nuptials?

As it turns out, of course, it is C.K. himself who pulls the louse-up, reclaiming Tracy as his bride. A consistently bright, bubbly, witty delight, The Philadelphia Story could just as well have been titled The Revenge of Katharine Hepburn.

Having been written off as box-office poison in 1938, Hepburn returned to Broadway in a vehicle tailor-made for her talents by playwright Philip Barry.

That property, of course, was The Philadelphia Story; and when MGM bought the rights to this sure-fire box-office success, it had to take Hepburn along with the package -- and also her veto as to who her producer, director, and co-stars would be. Her strategy paid off: after the film's release, Hepburn was back on top of the Hollywood heap.

While she didn't win the Oscar that many thought she richly deserved, the little gold statuette was bestowed upon her co-star Stewart, perhaps as compensation for his non-win for 1939's Mr. Smith Goes to Washington. Donald Ogden Stewart (no relation to Jimmy) also copped an Oscar for Best Adapted Screenplay.

The Philadelphia Story was remade in 1956 with a Cole Porter musical score as High Society.