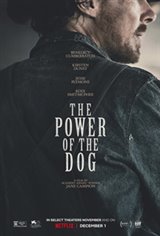 The Power of the Dog (Netflix)

Phil Burbank (Benedict Cumberbatch) is a charismatic and beguling man capable of inducing both fear and awe from those around him. In town one day he comes across the widowed proprietress Rose (Kristen Dunst) and her son Peter (Koti Smit-McPhee), but his cruel behavior towards them drives them to tears. In response to this, Phil's brother George (Jesse Plemons), comforts them and later goes on to marry Rose.

Now sharing a home with Phil, Rose and Peter do their best to remind themselves that Phil is just a man, despite his cruel tendencies. However, Phil's attention towards the two takes a curious turn. Phil remains just on the edge of Rose's vision, while whistling a tune that haunts her, and also taking Peter under his wing. Whether this action is a softening of Phil's attitude towards them or something more sinister remains to be seen.