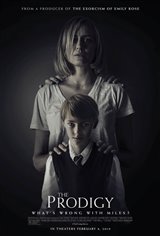 A young couple is amazed when their baby boy, Miles, begins saying words. When he gets a little older, his mother, Sarah Blume (Taylor Schilling), has him tested and is told by the doctor (Paula Boudreau) that his intelligence is "off the charts." However, as we soon find out, Miles has a cruel streak.

When he gets to school age, Miles has a difficult time making friends and begins to exhibit odd behavior. Sarah brings in a specialist, Arthur Jacobson (Colm Feore), to meet with the boy. He tells her Miles is dangerous. Soon, it becomes clear to everyone that there's something very wrong with Miles.

Canadian Connection: Filmed in Canada. Many of the cast members are Canadian.;