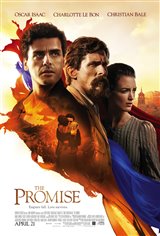 Michael (Oscar Isaac) is a humble Armenian medical student who leaves his village of Siroun to study medicine in Constantinople. He then meets the beautiful Armenian artist Ana (Charlotte Le Bon), and the two bond over their shared heritage. However, Ana is already in a relationship with American journalist Chris (Christian Bale).

A romantic rivalry explodes between the two men amid the chaos of war as Constantinople crumbles under the falling Ottoman Empire and Armenians are targeted. Both men are struggling to stay alive while also fighting for their respective relationships with Ana.