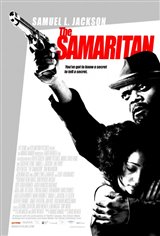 When he's released after serving 25 years in prison, Foley (Samuel L. Jackson) decides to turn his life around. The possibility of starting fresh seems to be possible when he meets an elusive young woman named Iris (Ruth Negga).

Unfortunately, his past tries to catch up with him when Ethan (Luke Kirby), the son of his former partner, wants Foley to join him in an ingenious plot. The more Foley tries to keep his nose clean, the tighter he gets meshed in Ethan's web of secrets and he begins to fear that some wrongs can never be made right.