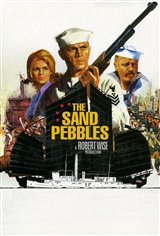 Steve McQueen received his only Academy Award nomination for his performance in this epic-scale war drama, based on the novel by Richard McKenna. In 1926, as China teeters on the edge of political revolution in the midst of a civil war, the USS San Pablo, is ordered to patrol the Yangtze River to represent and protect American interests.

While the San Pablo may be an American ship, much of the labor is actually performed by Chinese locals willing to work for American money, while stern but inexperienced commanding officer Captain Collins (Richard Crenna) frequently drills his charges, unsure what else to do. A machinist's mate with just under a decade of navy service behind him, Jake Holman (Steve McQueen) is assigned to the San Pablo and immediately makes enemies among the crew -- he prefers to do his own work rather than farm it out to others, and the one Chinese man who works by his side, Po Han (Mako), is treated as an apprentice rather than a servant.

Holman also falls in love with an idealistic American missionary (Candice Bergen), while his shipmate Frenchy (Richard Attenborough) falls for a Chinese girl and - with marriage plans in mind - kidnaps her to prevent her from being auctioned off.

As Holman's methods and attitudes continue to anger his comrades, they find themselves increasingly at odds with the Chinese, especially after Frenchy's girlfriend becomes pregnant and Po Han is captured by revolutionary forces and branded a traitor.