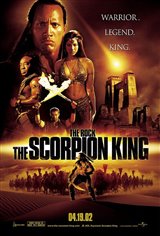 Set five thousand years ago, a few scattered desert tribes unite against their common enemy, Memnon (Brand), a ruthlessly ambitious warlord, by enlisting the services of an assassin named Mathayus (The Rock) to kill his most dangerous asset, a seer who advises him where, when and how to attack, with deadly precision.

Slipping into Memnon's palace in the notorious city of Gomorrah, Mathayus discovers that the evil leader's visionary is a woman, the beautiful Cassandra (Hu). Rather than kill her, he takes Cassandra hostage, deep into the desolate Valley of the Dead, where he rallies his allies and prepares them for a final confrontation with Memnon.

Although Cassandra's visions have predicted that Mathayus would die in such a fight, he has always lived by the simple creed of his people -- live free, die well. He also believes he can create his own destiny, and with that conviction, transcends his heritage, evolving from assassin to legend... to The Scorpion King.