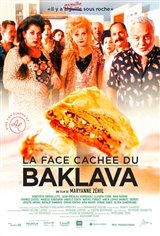 The Sticky Side of Baklava

Houwayda and Joëlle, two sisters from Lebanon, have chosen to make a new home in Quebec. While Houwayda has embraced the Western way of life with her husband Pierre, a professor at the University of Montreal, Joëlle has remained deeply attached to her culture. A few days before Pierre's departure for Montpellier, where he has landed a position for a year, a series of events reveal the cultural gap that remains between Houwayda and her husband, as well as between her and her sister.