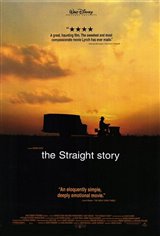 This film chronicles a 1994 long-distance road trip made by 73-year-old Alvin Straight from Laurens, Iowa, to Mt. Zion, Wisconsin. Nothing unusual about that until you get to the punch line ... he traveled the whole route sitting astride a riding lawn mower. Alvin undertook his strange, slow and loud journey to mend his relationship with his ailing and estranged, 75-year-old brother, Lisle.

Perhaps even stranger than Alvin's journey is the fact that this film is directed by the man who turned weird and bizarre behavior into must-see TV with his Twin Peaks series as well as directing the films Blue Velvet and Wild at Heart. Sure, Alvin's behavior is a little weird, but there's not going to be the Lynchian trademarks we've come to expect -- things like severed ears, kinky sex and a log with a message.

(Brings to mind the old joke: Did you hear about the farmer whose wife left him? -- beat -- Neither did he until he got his John Deere letter.)