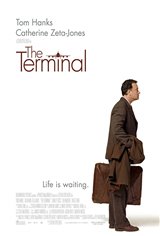 Viktor Navorski (Tom Hanks) is a visitor to New York from Eastern Europe, whose homeland erupts in a fiery coup while he is in the air en route to America. Stranded at Kennedy Airport with a passport from nowhere, he is unauthorized to actually enter the United States and must improvise his days and nights in the terminal's international transit lounge until the war at home is over.

As the weeks and months stretch on, Viktor finds the compressed universe of the terminal to be a richly complex world of absurdity, generosity, ambition, amusement, status, serendipity and even romance with a beautiful flight attendant named Amelia (Catherine Zeta-Jones). But Viktor has long worn out his welcome with airport official Frank Dixon (Stanley Tucci), who considers him a bureaucratic glitch, a problem he cannot control but wants desperately to erase.

During his accidental exile, Viktor encounters and befriends an array of airport employees, some of whom aren't very far removed from their own assimilation to America.