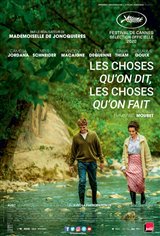 Maxime, a young writer living in Paris, goes to visit his cousin François, who has moved to Provence with his girlfriend Daphné, a documentary editor who is three months pregnant. When Maxime arrives at the train station, Daphné comes to welcome him because François is detained in the capital for a few more days. Daphne and Maxime don’t know each other, but as they wander around the region, their initially timid conversation takes on a more intimate, even confidential turn. Alternately, they each remember their romantic episodes, both happy and unhappy, that led them to the present time.