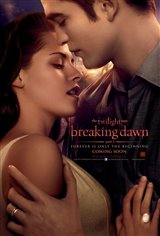 Bella (Kristen Stewart) decides to remain human for a while longer after marrying Edward (Robert Pattinson). They honeymoon on a private island where Edward can bask in the sun without causing alarm. When she begins to get sick, Edward rushes her home to Forks.

They soon realize that despite all odds, Bella is pregnant and the baby is growing so quickly that Bella's life is in danger. The Cullens are afraid that if Bella gives birth, she will die, but she refuses to give the child up.

When the Quileute wolf pack learns of the pregnancy, they fear that the baby will be like a newborn vampire—a crazed blood drinker who murders innocent humans. They plan to destroy it—and if Bella is killed in the process, so be it.