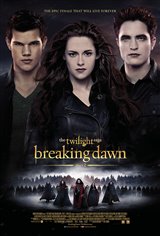 Bella (Kristen Stewart) has given birth to a baby girl she names Renesmee, after her mother Renée, and Edward's (Robert Pattinson) adopted mother, Esme. Jacob (Taylor Lautner) bonds with the child and helps the new parents keep the girl safe from his former wolf pack.

When the Volturi hear about the child, they assume the Cullens have broken vampire laws and have created a newborn by turning a human child into a vampire child. Alice has a vision showing her that the Volturi are coming to kill them all, and no explanation will be good enough for them. The Cullens summon their vampire friends from around the world to get to know Renesmee so they can prove she's a human/vampire hybrid.

When Alice and Jasper disappear, the Cullens fear the worst and try to prepare themselves for an all-out war.