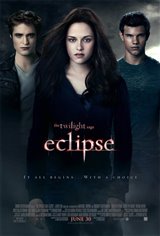 With Edward (Robert Pattinson) back in Forks, Bella Swan (Kristen Stewart) is happier than she's ever been. He's crazy in love with her and he vows never to leave her side. She doesn't realize that a series of mysterious murders in Seattle are going to impact her life in a very big way.

Edward, however, knows what danger she's facing and without revealing to her what the danger is, keeps her out of harm's way. Her old friend Jacob Black (Taylor Lautner) feels she should know and tells her an evil vampire named Victoria is trying to get even with the Cullens (for the death of her mate James) by killing Bella. She fears not only for her life, but for her father's life, the lives of the Cullens, whom she's come to love, and for Jacob's wolf pack.

Although graduation is on the minds of her fellow students, Bella's thoughts are about being transformed into a vampire so she can stay the same age as Edward and be with him forever. Edward, who fears that vampires have no souls, wants her to remain human. When she threatens to get one of the other Cullens to help her transform, he finally agrees, but only if she marries him first. Bella feels marrying at such a young age is foolish, but Edward has retained the morals he grew up with and remains firm.

Meanwhile, someone is creating an army of newborn vampires in Seattle, and the havoc they're creating by murdering innocent people is getting media attention. Alice can't see who is behind it. Could it be Victoria (Bryce Dallas Howard), still bent on revenge? Or the Volturi, making sure that Bella keeps her promise to them? It becomes clear that no matter what, Bella is in danger and Edward and Jacob have to come to a truce in order to protect her.