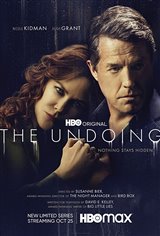 The Undoing is an HBO miniseries, based on the book You Should Have Known by Jean Hanff Korelitz. Grace Fraser (Nicole Kidman) is a successful New York psychologist whose world falls apart when her oncologist husband Jonathan (Hugh Grant) is arrested for the brutal murder of Elena Alves (Matilda De Angelis), a fellow parent at her son’s private school.

The police can't seem to locate Jonathan, who might have fled the country. Furthermore, Grace is shocked when Detective Joe Mendoza (Édgar Ramírez) reveals that Jonathan is no longer employed at the hospital and was terminated due to inappropriate contact with Elena.

As more details come to light, Grace wonders if she ever truly knew her husband. Meanwhile, other suspects in the case are questioned, including Elena’s husband.