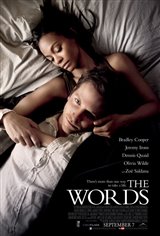 Rory Jansen (Bradley Cooper) is a struggling writer. After five years of being unsuccessful at getting his novel published, Rory is stuck as a supervisor in a publishing firm and has slowly let his life slip away. One day, while rifling through his old belongings, Rory finds a manuscript in an old briefcase he bought in Paris. It's the best novel he's ever read and is unlike anything he’s ever written.

The manuscript lists no author, so Rory decides to pass it off as his own. In doing so, he experiences a level of fame and fortune he'd never imagined, although wife Dora (Zoe Saldana) always knew he deserved it. Rory manages to live in bliss and denial until he meets the Old Man (Jeremy Irons), the true author of the manuscript, a story he wrote about his own life. Rory quickly learns that his devious actions come with a big price.