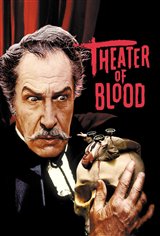 Edward Lionheart (Vincent Price) is incensed that his last season of performances in Shakespearean plays did not win him a prestigious acting award from critics. After an unsuccessful attempt at suicide, Lionheart is rescued by a group of drug-addicted bums.

He then sets out to murder all of his critics, each with a different style of death taken from a Shakespeare play. When Lionheart faces head critic Peregrine Devlin (Ian Hendry), he offers Devlin a second chance to bestow the award.