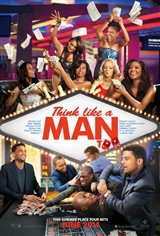 A sequel to the 2012 comedy Think Like a Man, the film follows the couples on their way to Las Vegas for a wedding. Candace (Regina Hall) and Michael (Terrence Jenkins) are getting married, so their friends hit Sin City for their bachelor and bachelorette parties.

They go out, with the men hitting strip joints and gambling tables and the women going to a nightclub. But plans for a romantic weekend go awry when their various misadventures get them into some compromising situations that threaten to derail the big event.