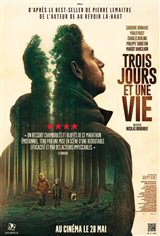 Three Days and a LIfe

Antoine, 12,  enjoys playing with his neighbors’ dog, Ulysses. When Ulysses is hit by a car, the dog’s owner, Mr. Desmedts, shoots the dog. Angry at the man, Antoine lashes out at his six-year-old son, Rémi, accidentally causing his death. The fatal event takes place in a wooded area, without witnesses. In a panic, the boy hides his victim’s corpse and returns home. A few hours later, the entire village is up in arms when it becomes clear Rémi is missing, and they join the panicked Desmedts family in a search for him. Blanche, Antoine's single mother, also takes part in the search, which turns out to be unsuccessful. Soon after, a series of storms flood the region, making further searches impossible. Ten years later, as Antoine prepares to begin his medical residency, he returns home for Christmas to visit with his mother and discovers that the area where Rémi’s body was hidden is now being redeveloped.