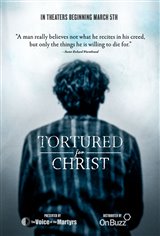 In August 1945, Soviet Russians seized power of Romania. The Communists declared atheism to be the official state religion. Pastor Richard Wurmbrand stood up and objected, saying that Jesus was mocked by those who tortured him. In response, the Secret Police captured Wurmbrand, declaring him "Prisoner Number 1." He spent 14 years in a Communist prison, enduring unspeakable torture on a regular basis.

However, his faith was never broken and when released, he wrote the book Tortured for Christ, which was released in 1967 and went on to become an international bestseller. His story is told here.